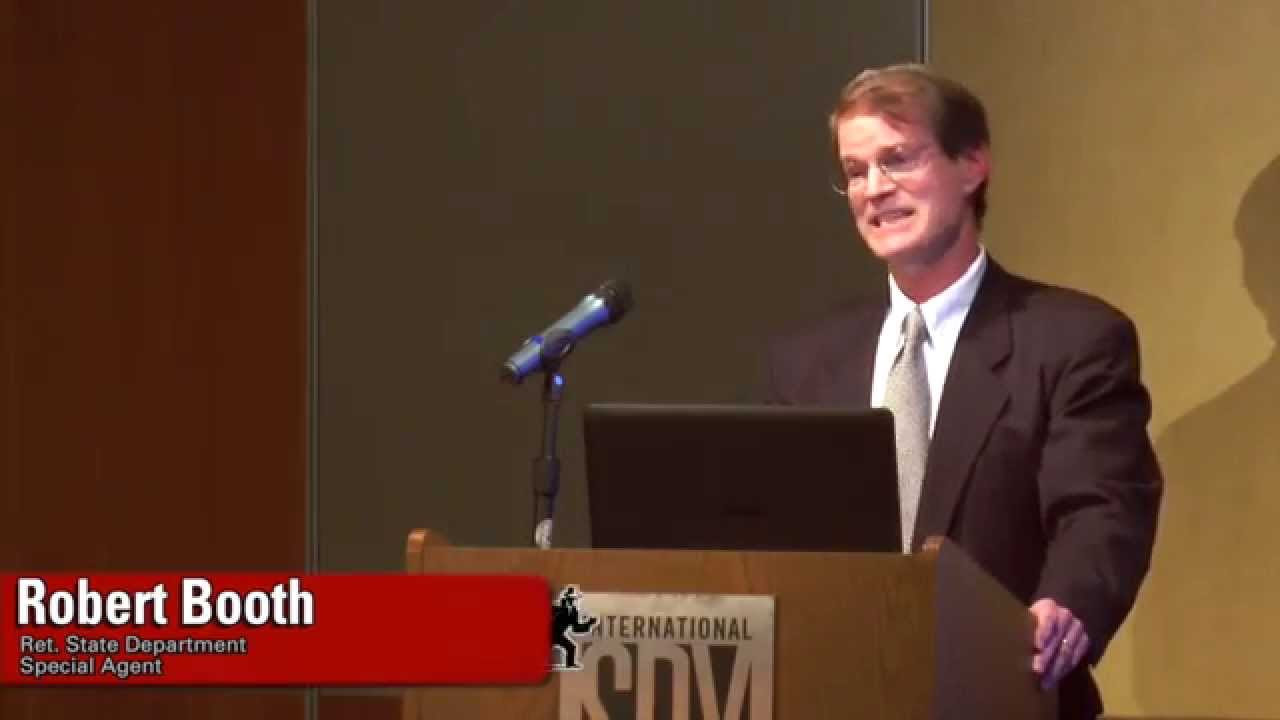 We had the opportunity to speak to Robert Booth.

TDR: What was the most frightening or interesting case you worked on in your counterintelligence career?
RB: It’s only frightening when you discover that there’s reason to believe that a State Department employee has in fact been recruited as a spy. It’s frightening because you don’t know what damage he or she has caused, or what potential damage he or she can cause. You’re frightened in the sense that American national security is being compromised, and you want try to stop it as quickly as you can. You’re trying to come up as quickly as you can with a solution to stop that person from hurting American national security. In counterintelligence, you’re looking for someone who is an American citizen, someone with top-secret security clearance, someone who’s betrayed his or her oath of allegiance to the United States. They don’t carry guns – they work calmly and quietly at their desks, and they go home anonymously.
When we get suggestive information that a State Department employee is passing information to a foreign intelligence service, the only thing we can do is begin an investigation with the hopes of identifying that individual and then taking him or her to court. By arresting them, you stop their activity. There’s no extrajudicial process or some Hollywood ending where you have a big shootout on the thirteenth floor of some building. In every case I’ve worked, the spies never had guns or knives. In every case I’ve worked where someone was arrested, his or her neighbors and colleagues always said they couldn’t believe that person was a spy – which shows you just how good spies are, and why it’s so hard to catch them.

TDR: What types of opportunities are there for computer science and other STEM students here at Dartmouth at the State Department, especially given the focus as of late on cyber warfare?
RB: Oh, there are many. The problem is that private industry will pay you ten times more than the government will. We had a brilliant gentleman – I couldn’t name him in my book – that was working with foreign service officers on developing cyber counterintelligence measures. Unfortunately, private industry finds out who these people are and just swoop them away at quadruple the pay – we can’t hold onto them.

TDR: Do you thus often resort to technical contractors to do many high tech functions?
RB: We do. They’re much more innovative, and private industry, I think, has more flexibility. The difficulty in government is when you have a huge bureaucracy like the State Department, you have one kind of computer system and one massive server and it’s tied into the embassies and everything else. So when the cyber experts come in and say, “We want to do this and do that,” given the government’s size, you talk about asking to spend massive sums of money to keep fixing little things. I remember when I started at the State Department in the 1970s, we were considered so innovative because we had Wang Computers. Wangs were word processors that preexisted computers. But once the State Department had invested all that money, within seven or eight years, Wangs were obsolete. Then the State Department had to rip all this infrastructure out and replace it and innovate, which is very tough to do.
TDR: In your book and your lecture you mentioned Donald Keyser and how he was the State Department’s resident expert on China. What would you advise current college students to do or learn if they have similar ambitions of becoming a regional or country expert?
RB: The first task in college would be learning languages, and hard languages at that. There’s nothing wrong with speaking French or Spanish – I’m a fluent French speaker – but if you want to be a Middle East expert, Arabic is going to put you on the fast track. You want to be a Russia expert? You have to learn Russian. You really want focus on China? Learning Mandarin is critical. Besides that, I think a liberal arts education is the best thing you can get out of college. Learning about other countries, being sensitive to other cultures – those are the kinds of courses or classes you could take at the College here that would help you be a good State Department officer. Speaking Arabic, right off the bat, within your first assignment, you’re going to be serving somewhere in the Middle East. There’s no question about it. You might have to serve a tour in Europe or South America later on to flesh out your full career, but you would then find yourself coming back to the Middle East. And this is something we all talk about, that Americans aren’t very good at foreign languages.

TDR: The terms “intelligence gathering” and “counterintelligence” have been in the news lately because of a series of scandals: Julian Assange and WikiLeaks, Private Bradley Manning, and, most recently, Edward Snowden revealing NSA programs. What are your thoughts on this assortment of leaks from within government agencies?
RB: I think it’s a bifurcated issue. On one hand, when you talk about the mega-data mining, you’re talking about Section 215 of the Patriot Act. This is a part of the Patriot Act that both Mr. Bush and Mr. Obama hardly support. By leaking that information, I think Mr. Snowden did a public service. I think Congress had not been doing its due diligence in forcing the NSA to tell them what exactly they were mining. I think Congress needs to determine if that sort of snooping is legal without a warrant. In that particular respect, I think Mr. Snowden has brought up a very important issue. Congress needs to look at what the role of the NSA is in this day and age, in data mining. On the other hand, for what Mr. Snowden has revealed, he needs to be tried for espionage. He has violated his oath and has in fact revealed information that violates the Espionage Act of 1917.
Private Manning, on the other hand, revealed over a quarter of a million State Department documents, of which only about 20,000 were classified. People don’t really understand that. None of them were top secret, not a single one – of course, that doesn’t mean that confidentiality and secrets can just be pushed out – but if you read these cables, there are some things that really shouldn’t be in the public view. There were some cables about the work we were doing in Northern Kenya to drill wells to help fight against Al-Shabaab. If you read it, you think, “These State Department people are doing a damn good job.” They’re doing exactly what the White House wants them to do. And so if you read these cables, you’ll realize that the State Department does a hard job in hard places, and they do a pretty good job. But you shouldn’t let individuals have the authority to just say, “I want these cables to go out to the public.” It’s not a good precedent to set.

The Dartmouth Review thanks Mr. Robert Booth for taking the time to speak with us.
James G. Rascoff also contributed to this report.